“Humiliation is the beginning of sanctification.”  -John Donne

On the fourth of July, Rick and I went golfing in a monsoon. We took cover in the clubhouse, and ordered a couple of beers to pass the time and dry out.  The bar only took cash, and we had none.  Unthwarted, Rick broke into my emergency stash of money I keep in the glove compartment…rolls of quarters I use in a pinch, or for parking.  The golf did not happen, but the beers were good, and we high-fived our resourcefulness and quick thinking in our beverage “emergency.” 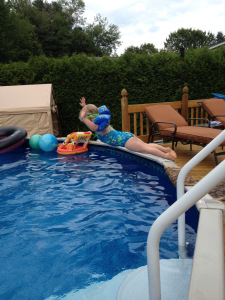 Total bliss, but the flop comes next.

This brings me to the flop. Yesterday.  After a week long visit at my in-laws home in northern Vermont with the hubs and kids, I was hightailing it home to Connecticut.  Rick and the girls would follow the next day.   It was hard to leave them, despite my yearning for my own bed and the peace of being able to work uninterrupted for a day.  I was longing for home, but acutely aware of how completely alone I would be in Connecticut. I have not made many intimate connections in our new area thus far, and there is a keen sense of loneliness that swamps me when I think about my lack of people.  Home is where your people are.

To help myself not dwell in the sense of homelessness but swim in the bliss of a long four hour drive alone (glorious!)  I was cruising at a smooth 70, enjoying the sun, the AC in my car, the freedom to be silent and listen to whatever I damn well please.  I was invigorated.  Alive.

Three hours into my drive, I realized that I was approaching my last quarter tank of gas.  And that is when the image of my purse, hanging on the back of my mother in law’s kitchen chair burned a hole in my brain.  I had no wallet.  No money.  Credit card.  ID.  Nada.

That’s ok!  I thought.  I will make it!  This is a test, surely.  This is a great blessing!  A chance to rise to the occasion!  Old Megan would be cursing and panicking, New Megan was zen, calm, living in the moment. And  at the moment, I had gas in my  tank, so no worries.  I’m livin’ in the NOW my friends.

A visual:  I’m more like Carly (confident) than Lydia (nervous but willing to try the ride). 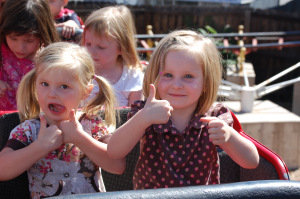 In mormon folklore, there are tons of stories about people that have tremendous faith, and they are sustained by miracles.  Like the bible story about Jesus feeding the 5,000. There are innumerable modern day miracle stories of mormon people that tithed their last cent to the church and find their supply of food magically replenished.  I may not be mormon anymore, but miracles happen, and not just to mormons!

This was going to be me.  I was going to make it all the way home, the gas tank will be sustained by my unshaken faith in the universe.  I turned off the AC, to conserve.  Just letting the universe know I was willing to meet halfway, be a little uncomfortable…(translation…sweat my ass off).

Twenty miles from home, the last bar on my gas meter disappeared.  I took the next exit, not wanting to be on the freeway as reality tapped me on the shoulder.  I pulled over, and I will admit, I said a few naughty words.  But then I took some deep, meditative breaths and chugged my way to a gas station on fumes.   I smiled, and felt safe and congratulatory for getting to a pump relatively calm and unscathed.

Ok. Time to regroup.  Maybe the miracle would look more like this:  I was going to dig through the pile of crap in my car and find a ten dollar bill.  There were mormon stories like this too.  Faith, people.

I was not losing composure. 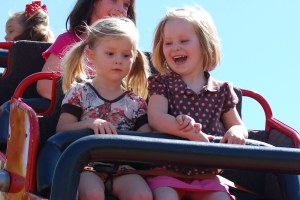 So I ransacked my car.  When all the trash had been tossed… the golf bag, tennis bag, suitcase, camera bag, writing satchel…

I found the squashed wrapper for the roll of quarters, and lamented those beers.  Just three days before, we drank away what should have been my last gallon of gas.

This is when I knew…I’m being punished for those brews.

The church IS true.*

But seriously, it was pushing 90 degrees with ungodly humidity, I was in unfamiliar territory, all of my family was four hours away. I searched for solutions, someone to help me, rescue me.  But there was no one.  I was going to have to beg for money.  This is so much worse than it sounds.  Believe me.

First, every time I have ever turned away from a person with an outstretched hand came back to my memory like a slap in the face.  And every moment I had put money in that hand attached with some heavy judgement made me burn with shame.  I watched eight or nine cars fill up and leave.   I could not bring myself to do it.

After loitering for 30 minutes, the shame or the heat or both sent me into the tiny station.  There was a line of people with wallets. They had bags of ice and Snickers bars and cigarettes.  Over their heads, the attendant asked me “which pump?” and much to my exceeding horror, my eyes filled with tears.  I ran to the back corner of the store to wipe them frantically away.  They just kept coming.

I cried in the Dorito isle and waited for all the wallets to leave, and then wept like a little girl as I explained my predicament to the guy behind the glass partition.  He asked me if someone was coming.  If my husband was coming, or a friend.  I told him no one was coming.  I was alone.  He suggested I begin asking customers for money and I retreated to the gatorade cooler to marinate in my mortification, unable to stop the crying.

I was humiliated.  The tears, the “damsel in distress” act I could not get a handle on… filled me with renewed shame.  I detest crying.  Especially in public. Especially  amongst strangers.

In the end, Gary B. from Windsor saved me.  I stalked him awkwardly, stifling those embarrassing shudders that happen when you are choking on intense emotion.  I watched him buy lottery tickets and gab with the attendant, who kept throwing me looks. I could barely make it through my plea, I had lost all control. He took pity on my obvious distress, and I was pulling into my driveway 15 minutes later.  My ability to stand in that humility and risk rejection was completely spent on that one request. If Gary had said no, I may have found myself enduring a long walk home, unable to gather the courage again.

Instead of writing all night as planned, I was wrung out by the experience.  I showered, letting the shame wash down the drain, and climbed into the sanctuary of my own bed.

I am going to tack this experience on to a growing list of excruciatingly humiliating moments I have been wading through lately.  It was probably on par with meeting the neighbors while giving Stella a lice treatment the week we moved here, but only marginally more tolerable than the school fundraiser this year.  Details withheld until I don’t feel like crawling into a hole at the mere mention of it.    Here’s to hoping the lesson I am meant to learn from marinating in humiliation is mastered soon.  Before I show up naked to Rick’s company picnic.  You never know.

* A very mormon declaration that LDS people use regularly to claim that the only church that has the complete “truth” is the mormon church.  It is often used to  “prove” that a circumstance directly correlates to the truthfulness of the gospel.

2 thoughts on “The Church is True: My Belly Flop”